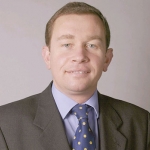 Borough Councillor
Educated at Oxford University, where he studied Modern History and Economics, before being elected to Parliament Philip spent most of his career as an industry research analyst examining the performance of water, gas and electricity companies across the UK. Philip served over eight years in the Territorial Army, latterly as a paratrooper. In 1984, Philip spent eight months working as a volunteer teaching assistant with a Baptist Mission in Honduras, Central America.